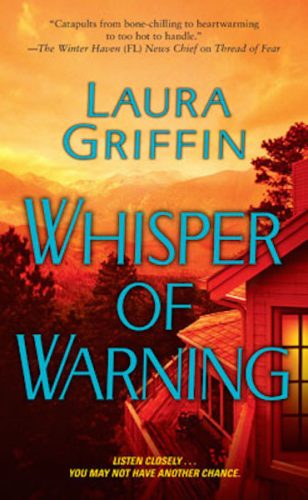 Courtney Glass has been in trouble all her life, but nothing tops being an up-close witness to a brutal murder. Until she’s accused of the crime.

Every scrap of evidence points to her guilt, and only Courtney knows what really happened. Now she must prove that she’s not a murderer…but is one of the killer’s intended victims. As police investigators hammer her for answers, Courtney knows she has two choices: run, or trust the brooding, sexy detective who’s made it clear she’s his prime suspect.

Will Hodges doesn’t need Special Forces training to know that, despite Courtney’s killer looks and razor-sharp tongue, her tough-girl act hides a vulnerable woman with a deadly secret. As the body count rises, Will realizes that a lethal enemy has Courtney in his crosshairs. The killer is waiting, watching her every move — and he won’t stop until her fear has grown from a whisper to a scream….

“WHISPER OF WARNING by Laura Griffin is a roller-coaster ride filled with intrigue, murder and toe curling passion. With irresistible characters and a plot thick with danger, WHISPER OF WARNING is a sexy and suspenseful read you won't want to see end.”

“A gripping romantic suspense that will keep you guessing until the final page.”

"Griffin combines a perfectly woven and tense mystery with a sweet and compelling love story…. The most avid mystery lovers will be pleased with the surprise ending.” 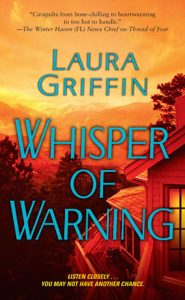 Courtney Glass whipped into the gravel lot and cursed the man toad who’d invited her here. This was August. Texas. It was ninety-nine degrees outside, and any halfway sane person was holed up in an air-conditioned building right now, not parked at a deserted hike-and-bike trail, hoping to score after lunch.

Did he think this was romantic? Spontaneous, maybe? Despite the Ivy League diploma, John David Alvin could be a real idiot.

Courtney huffed out a breath and flipped down the vanity mirror. Idiot or not, she wanted to look good. Looking good was the best revenge, especially when it came to ex-boyfriends.

But the Beauty Gods weren’t smiling on her today. The humidity had turned her hair limp, and her makeup was practically melting off. She dug through her purse, seeking inspiration but finding little. She blotted her forehead with a tissue and fluffed her hair. She started to put on lipstick, then decided to hell with it. Who cared if she impressed David? He was the last person she wanted to see right now. She shouldn’t even be here, really, but his insistent messages were driving her crazy. They needed to hash this thing out, once and for all.

A flash of movement in the rearview mirror caught her eye. He was here. She watched the black Porsche Cayenne glide up alongside her. He’d traded in the red Carrera, apparently, which shouldn’t have come as a surprise. Suddenly nervous, she cast a glance around her Buick Skylark, a hulking testament to the emptiness of her bank account. Courtney could work wonders with drugstore cosmetics, and she was a bloodhound for treasures in a thrift shop, but this car was beyond help. Until she climbed out of credit card debt, she was stuck in a ’98 clunker with a temperamental AC. She turned up the power now and adjusted the vents.

David sat in his SUV, but didn’t get out. Courtney could feel his gaze on her while she cleared clutter off the front seat. She refused to make eye contact. This was hismeeting, and he was going to have to come to her. She didn’t relish the thought of talking to him in her heap, but she wasn’t stupid enough to give up her home field advantage by getting into his Porsche.

From the corner of her eye, she saw him exit the car and fist his hands on his hips. She set her chin. She could match wills with him any day of the week. Sweat beaded between her breasts as she waited, silently, gazing through the windshield at the dragonflies playing in the sunshine.

Finally the Buick’s door squeaked open, and he slid into the passenger seat. He wore a crisp white shirt with monogrammed cuffs, a red power tie, and his usual dark pants. In an instant, the Skylark smelled like Drakkar Noir.

Courtney looked at him with disgust as she rolled down her window.

“I most certainly did not.”

“Text message. Whatever.” God, he was such a prick. Just smelling him again made her want to retch.

He gave her an annoyed look. “I don’t have time for this shit. This is bordering on harassment.”

Suddenly the back door jerked open. Courtney turned around and found herself face-to-face with a black ski mask.

The man pulled a gun out of his pants and pointed it at David’s nose. “Gimme your phone.”

All the breath whooshed out of Courtney’s lungs. She gaped at the gray eyes glaring out from holes in the mask.

He jabbed the gun at David’s neck. “Now!”

She glanced at her ex-boyfriend. His arrogance had morphed into fear, and he wasn’t moving. Do it! She tried to tell him mentally, but he was frozen. At last, he braced a hand on the dashboard and jammed the other into his front pocket.

She cast a panicked look outside. No one. This was unreal. It was the middle of the day. Granted, it was hotter than hell outside, but there had to be someone —

The barrel swung toward her, and her stomach dropped out.

She stared at the twisting pink mouth and tried to process the words. Hers, too. Her phone. He wanted her phone. Did he want her money, also? Her phone was in her purse, along with her Mace.

David tossed his phone at the guy, and it landed with a clatter on the back floorboard. The man scooped it up and shoved it in the pocket of his tracksuit.

Then the masked head turned toward her. “Now, or I’ll blow his fucking brains out.”

Her purse was near her feet. On the floor. And her Mace was in there. She dragged the bag into her lap and thrust her hand inside. She groped for the tube of pepper spray but couldn’t find it amid all the junk she lugged around. I can’t die yet. There’s so much I haven’t done.

“Now!” The eyes watching her through the cutouts squinted.

Her clammy fingers closed around the phone, and she pulled it free. She held it out to him.

Time stretched out as the phone hovered there in her trembling hand. He reached for it. He wore tight black gloves, and she knew — with sudden certainty — this was going to end badly.

He squeezed her wrist, and the phone dropped to the floor. He didn’t let go her hand.

“Take my wallet,” David said, yanking it loose from his back pocket. “Take whatever you want.”

Courtney watched, transfixed, as the black-gloved hand pried open her fingers. Did he want her ring? The cheap silver trinket from Santa Fe?

The pistol slapped into her palm. The thick black fingers squeezed her hand around the grip. Suddenly she realized what was happening. She tried to yank her arm away, but couldn’t.

“No!” she shrieked, pulling her arm until her shoulder burned.

Their bodies jerked in unison. Surprise flickered in his eyes as red bloomed on his white shirt. He sagged sideways, thunking his head against the windshield.

Courtney’s ears rang. A high-pitched noise rasped in and out of her throat as she stared at the gun in her hand. The gloved fingers closed around hers again, and she thrashed sideways, trying to wrench her arm away.

“No!” She used her free hand to punch at the ski mask as hard as she could. Her whole arm reverberated from the blow.

The windshield exploded. Screaming, she hunched down in her seat. Her gaze landed on her purse, wedged between her leg and the door. The Mace was there, peeking out from inside the bag. Her right hand was being crushed as the man forced her unwilling fingers around the grip. With her left, she grabbed the Mace. Her wrist twisted painfully. The gun barrel turned toward her.

Her thumb found the top of the vial. A stream shot out, straight at the ugly pink mouth in the hole of the mask.

She crashed backward into the steering wheel as her arm was released. Curses and moans filled the car as she clawed frantically at the door latch. The door popped open, and she pitched sideways onto the gravel. She tasted dust and jerked her legs free from the car. She glanced back over her shoulder and saw David slumped against the dashboard.

The back door squeaked open.

She scrambled to her feet and ran. 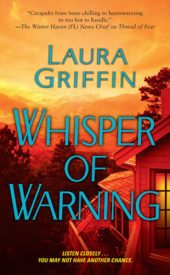