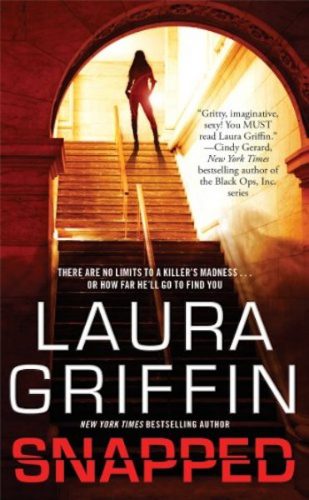 After being caught in the crossfire of a deadly campus shooting, Sophie Barrett counts herself lucky to escape with her life. As details of the incident begin to emerge, though, she realizes there is more going on than a senseless act of violence. Now she just has to convince a team of investigators that they’ve got it all wrong.

Homicide detective Jonah Macon knows Sophie has a knack for crossing paths with trouble. He’s saved her butt before, and he’s more than happy to do it again. After all, she’s beautiful, sexy, and fearless. But when she takes on an entire task force of experienced cops, he thinks she’s finally gone too far. Her conspiracy theory is, in a word, unbelievable.

"SNAPPED rocks! Griffin consistently cranks out one gripping suspense after another and this may be the best yet… The characters are flawed and completely endearing."

"You won’t be able to put this book down."

"Laura Griffin mesmerizes…. SNAPPED is a captivatingly passionate romance where danger is around every turn."

"A gripping, white-knuckle read. You won't be able to put it down." 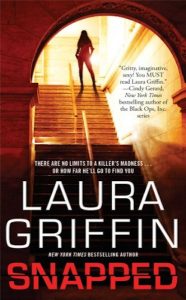 Parking on campus was a bitch and so was Sophie. Or at least, she was in a bitchy mood at the moment. She was hot, hungry, and doomed to spend the better part of her lunch hour waiting in line at the registrar’s office.

But then she spotted it–a gleaming, perfect, gorgeously empty parking space not fifty feet in front of her. The green flag indicating time still left on the parking meter was the cherry on top of her lunchtime sundae.

“Thank you,” she sighed, as she rolled past the spot, shifted into reverse and flipped her turn indicator. She started to ease back when an old-model VW zipped up behind her.

“Hey!” Sophie pounded her horn as the Bug driver whipped into her spot while pretending not to see her.

“Unbelievable!” Sophie jabbed at the window button and leaned over to yell at him. “Yo, Fahrvergnugen! That’s my spot!”

A horn blared behind her and she glanced around. Now she was holding up traffic. She shifted into drive and muttered curses as she scoured the busy streets for another scrap of real estate large enough to accommodate her Tahoe. Of course, there wasn’t one. She glanced at her watch. Damn it, she was going to be late getting back to work, and she’d long since used up her tardy passes. With a final curse, she pulled into an overpriced parking garage three blocks downhill from her destination. After squeezing into a spot, she jumped out and dashed for the exit, pressing numbers on her cell phone as she went.

“Mia? Hey, it’s me.” She stepped onto the sidewalk and blinked up at the blindingly bright sunlight.

“Shoot, forget it then.” Sophie caught a heel on the pavement as her crappy luck continued.

“I’m at the university,” Sophie said. “I was going to ask you to cover the phones for a few minutes if I’m not back by one.”

“Don’t worry, I’ll get Diane to cover it.” Diane was the assistant evidence clerk at the Delphi Center where Sophie worked, but she wasn’t exactly known for her cheery disposition. “She owes me a favor anyway. We’re still on for margaritas with Kelsey, right? Six o’clock?”

Sophie dropped the phone in her bag and continued uphill. The sun blazed down. Her blouse grew damp. Her tortured feet reminded her of the folly of buying Victoria’s Secret sandals on clearance and expecting them to fit. After waiting for a break in traffic, she darted across the street and felt the heat coming up off the asphalt in waves. Jeez, it was hot. Thank goodness she was signing up for a night course.

At last, she reached the grassy quadrangle and enjoyed a few patches of shade as she neared the registrar’s office. Students streamed up and down the sidewalks, talking with friends and reading text messages. Sophie gazed wistfully at their cut-off shorts and tank tops. Once upon a time she, too, had lived in grunge wear. She didn’t miss the clothes so much as that time in her life when she’d had nothing more to do than go to keg parties on weekends and cut class to hang out with her boyfriend. Now both those pursuits seemed worse than trivial–they seemed wasteful. How could a few short years make such a difference in her outlook?

She marveled at the irony–here she was plunking down her hard-earned money to attend a class she would have happily ditched just a few years ago. The perfect revenge for her I-told-you-so parents. Only they’d never get the chance to say that because she had no intention of telling them she was back in school. This was her private mission, and if she failed to accomplish it, no one would ever have to know she’d tried.

Sophie navigated the busy sidewalks, longing for a pair of Birkenstocks instead of heels. She glanced again at her watch and knew, without a doubt, she was going to be late.

She halted in her tracks.

People shrieked behind her, and she whirled around. Her gaze landed on someone sprawled across the sidewalk. A man. Sophie stared in shock at the jacket, the tie, and the bloody pulp that should have been his head.

Someone’s shooting! The words screamed through her brain as she scanned her surroundings. She was in an open field. She was a target.

More shrieks as she bolted for the trees. A staccato of bullets. Clumps of grass burst up at her and she fell back, landing hard on her butt. Before her eyes, a woman collapsed to the ground, clutching her throat. A child in pigtails howled. Crab-walking backward, Sophie glanced around frantically. What was happening? Where was it coming from? Screams echoed around her as people ducked and dove for cover.

She rolled to her knees and lunged for the nearest solid object–a cement block at the base of a statue. She crouched behind it, gasping for breath, every nerve in her body zinging with terror.

More gunfire. More screaming. Sophie cupped her hands over her head and tried to make herself small.

Jonah Macon stared at the dilapidated house where absolutely nothing had happened for the past seven hours. He hated surveillance work, and not just the boredom of it. His six-foot-four-inch frame wasn’t designed to be crammed into the back of a van for days on end.

“If I drink another cup of this coffee, my piss is gonna turn black.”

“Nice image,” Jonah’s partner quipped, tossing his Styrofoam cup into an empty Krispy Kreme box. Ric Santos had volunteered to bring breakfast this morning, and the doughnut shop was just around the corner from his girlfriend’s place.

So now here they all were–bored, caffeinated, and jacked-up on sugar that needed to be burned off. Jonah leaned back in his seat and popped his knuckles as he stared at the video monitor.

“Seriously, how late can he sleep?” Sean asked. “I’m about to bust in there and drag his skinny ass out here myself.”

“Movement at the door,” Jonah said, and everyone snapped to attention.

A man stepped onto the porch, finally breaking the monotony. Jonah’s team had been in the van since before dawn, waiting for their subject to kiss his girlfriend goodbye and lead them to the crib where they were ninety-nine percent sure their murder suspect was holed up. Sure enough, they watched on the screen as their subject got some goodbye tongue action before tromping down the rickety front porch steps.

“Think he’s stepping out for a paper?” Sean asked sarcastically.

“I’m not sure he can read.” Ric eased out of the bucket seat in back and slid behind the wheel while Jonah reached for his radio to give the guys in the car down the block a head’s up.

The phone at Jonah’s hip buzzed. Then Ric’s phone buzzed. Then a snippet of rap music emanated from Sean’s pocket.

Everyone exchanged a grim looks as they took out their phones. Jonah answered first.

“Get to campus, ASAP! Where’s the SWAT van?”

“Perkin has it,” Jonah told his lieutenant. “He’s up in Austin at a training op–”

“Someone’s shooting people all over the quad! Get over there and suit up. Grab everyone you can.”

Jonah braced himself against the side of the van as Ric peeled away from the curb. From the look on his partner’s face, Jonah knew he was getting similar instructions.

Jonah was already leaning over the backseat to do a quick inventory of the cargo space. “Two shotguns, a rifle, and a couple of flash bangs.” His pulse started to pound. “How many shooters?”

“What kind of weapon?”

“We don’t know that either. We don’t know shit! All I got is a bunch of hysterical 911 calls, someone’s gunning down people on the lawn. Some kid just got shot off his bike. ETA?”

Jonah glanced through the tinted windows as a blur of storefronts raced past. “Two minutes, tops.”

“Okay, then you’re it, Macon. I’m fifteen minutes out. You guys got any Kevlar?”

“Three vests and a flak jacket.”

“Take all of it. And call me when you get there.”

Another burst of cement on the nearby sidewalk. Sophie huddled tighter and looked back at the howling little girl.

“Get down!” Sophie shouted.

From the pavement, an arm reached up and tugged weakly at the girl’s shorts. The arm was attached to a hugely pregnant woman who was lying in an ever-expanding pool of her own blood.

Dear Lord. Someone had to get them out of here, but there was no one. The campus that had been crawling with students just moments ago was now a ghost town. Sophie darted her gaze around. Where was the shooter? Had he entered a building? Sophie eased up slowly and peered around the base of the bronze statue.

An agonized scream behind her. Sophie recoiled. She peeked beneath her quivering elbow and saw a man hunched at the base of a flagpole, clutching his ankle with a bloody hand.

Sophie’s gaze was drawn to the headless corpse behind her, now baking on the sidewalk. At the edge of the grass, another man lay sprawled across the ground, a backpack beside him. A student. Sophie’s heart jack-hammered against her rib cage as she watched the flies already buzzing around him.

The crying intensified. Sophie glanced again at the child, who was hunched over her mother, sobbing uncontrollably. She had to be only two, maybe three years old. The woman twisted onto her side, probably trying to shield the girl with her body. They were behind a large oak tree, thank goodness. But if the child moved too much—

Glass shattered on a building nearby.

Crack. Crack. Crack. One by one, the second-story windows exploded, and she thought of those shooting games at carnivals where the targets were little yellow ducks.

Sirens grew louder as Sophie scoured the rooflines for any sort of movement or muzzle flash. She went from building to building all around the quadrangle, searching the red tile roofs and the highest row of windows.

Her gaze came to rest on the white limestone monolith that sat atop the hill, overlooking the entire campus like a giant Sphinx.

And suddenly she knew. The gunman was on top of the library.

And from there he could see everything. 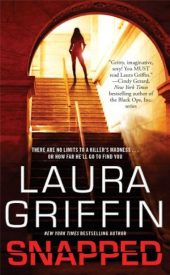